You are not connected. Please login or register
Welcome to the Low Carb Diabetic forum,have you signed up yet? if not then sign up and join us in the low carb community today!
3 posters

The forum of flog latest.

The forum of flog latest.

After years of telling us on a very regular basis, "I have never increased fat in my diet" yes I’m talking about the bonkers one, he posted the other day his daily fat intake as 100 to 130 grams per day, which equates to 900 to 1170 calories per day from fat. Sid has also stated for years, portion control is paramount to controlling weight and T2 diabetes. He stated recently he dropped to around 60 grams of carb in the early days of diagnosis, these days consumes around 100 grams of carb per day. It appears to me unless he is eating one hell of a lot of protein, his diet is clearly based on phat! Who would've thought it! Remember, this is the bloke who who adds “a splash of semi-skimmed milk” to his cornflakes, because, well you don’t want to pig out on phat do ya. 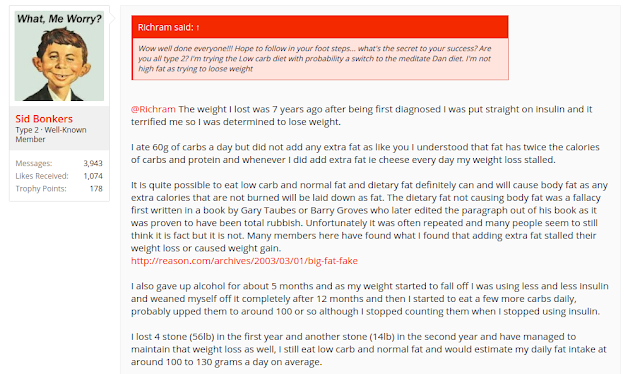 Nice to see the other arch bullshit merchant, the one and only Duggie appears to have turned over a new leaf. The man that has boasted for a long time of holding non diabetic BG numbers on a diet of complete junk. Pot noodles, pizza, meat pies, ale and enough chips to sink a rubber covered frogman, has dumped the err…..chips.

Meanwhile the flog never misses an opportunity to guild the lily in some way or another, we now have retired mods. This got me wondering, how about a resigned in disgust title for people like Fergus, Dennis, Dr. Katharine Morrison, IanD, Pneu and our own Mo et al. Maybe a fired in disgrace title for the likes of Kenny Boy, Sue, Tubolard, Jopar, SarahQ (aka Carbsrock) who have I missed? The Cherub, any ideas? 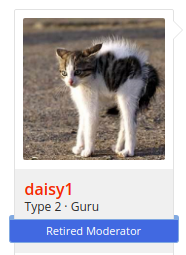 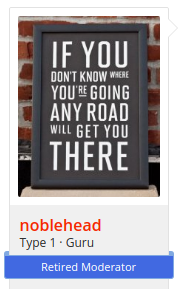 Meanwhile Daisy the retired, continues to paste lamentable information to the newbies, something many of us have criticised for years. I suspect all who post here, know very well the NICE guideline numbers for BG are one of the reasons 93% of type one diabetics, and over 50% of type two diabetics fail to achieve safe BG numbers, as confirmed by the NHS diabetes audits published every year.

“The blood sugar ranges recommended by NICE are as follows:

@Eddie wrote:Meanwhile Daisy the retired, continues to paste lamentable information to the newbies, something many of us have criticised for years. I suspect all who post here, know very well the NICE guideline numbers for BG are one of the reasons 93% of type one diabetics, and over 50% of type two diabetics fail to achieve safe BG numbers, as confirmed by the NHS diabetes audits published every year.

Don't forget Daisy was Kenny's handmaiden when he started his forum she was actively trying to recruit members for him from DCUK, and the information she pastes was originally posted by Kenny and Sue (This post has been edited from Sue/Ken's post to include up to date information.)
_________________
I'm a skinny T2 diagnosed 4/4/2008, a high calorie LCHF diet and one metformin a day A1c 6.2 and no complications.

Proving the LowCarb sceptics wrong for over ten years

Not all cherubs are Angels

nor all diabetics Bonkers

So while Sid was low carbing he actually metabolised 70 lbs of body fat, just not dietary fat. Ted Naiman would be proud of him! He had an excellent tweets showing how you could be in ketosis just by losing body fat and nor needing to actually eat any.

and I have this bookmarked to watch later

It must be winter, he has a shirt on.
Sponsored content